I met my best friend, who also happens to be autistic. She observed autistic traits in me that no one else had in the 31 years previously.

I was sceptical. I was almost 32 and no one had ever even considered I was anything other than neurotypical (outside of depression and anxiety) but what she was saying made sense.

She pointed me in the direction of online Autism Quotient tests. I scored between 39-42 on pretty much every test I took. She scored 39 and had an official diagnosis.

On the 22nd February 2017, I accepted that I was autistic. I sat crying into my phone messaging my best friend saying that nothing had ever made so much sense to me in my life.

With research I’d been doing over the last few months I came across some great trans and autistic communities and realised that some 35% of autistic people are also trans or gender nonconforming. (I wish someone would study that link.)

I went to my GP and told them that I think I’m autistic and gave them a list of reasons why. They asked me all sorts of intrusive questions that I didn’t like. I left that appointment crying and proceeded to have a meltdown in my car. (I’d also spoken to them about trans issues in this appointment and the questions about that were so uneducated and misinformed. This was also to be my downfall going forward for both issues.)

I attend my first appointment at Trealaw Mental Health Unit in South Wales.

Expectations: GIC referral and referral to a consultant psychologist to be assessed for ASD. (Autism Spectrum Disorder.)

Reality: Nonbinary erasure, intrusive questions, disbelief that at 32 I was only just realising I was both trans and autistic.

I went over again all the things I had told my GP using my list I created, breaking down different behaviours in blocks of 5 years up until the present day. The nurse I saw took a photocopy of the list and said that they were unable to refer me me further because they were not a consultant and they didn’t know when a consultant would be available to see me.

The above situation happened a total of 7 times, including an appointment which had a blood test in it to see if I was able to go on testosterone. (Talk about getting my hopes up!)

It was so draining, intrusive and destroyed my mental health. My drinking increased ten fold in this time. It was the only way I could cope with the constant invalidation and disappointment. I had a meltdown in my car after every appointment.

I also had an autism advocate write two letters of complaint. Each time I got a call from the head of mental health in my county apologising. I kept telling him that I thought someone along the line was gate keeping the pathways and that I wasn’t going to give up. I made it very clear that we could continue wasting NHS time and resources for as long as he wanted.

The first one comes with clear instructions as to what the appointment is for. I’m going to see a consultant to be assessed for ASD. The appointment is in January and they need me to fill out a written autism quotient test and bring it with me.

The second letter has no details on it, just an appointment at the standard mental health place in February. (It was cancelled due to snow so I still don’t know what this was for, but as of Feb 2018 I still don’t have an NHS GIC referral.)

The day of my appointment with the consultant is here. I’ve deliberately got myself in a bit of a state by messing with my routine and having lots of appointments on the same day to emphasise my autistic traits. I mask quite well sometimes and that was definitely not needed here.

I rock up at Trealaw Mental Health Unit only to find that my appointment was at the Royal Glamorgan Hospital and not the place I had been attending for the past few months. They took my AQ test and rescheduled the appointment. I went and had a meltdown in my car, which seems pretty standard practise for all my visits there now.

The day itself  before my appointment was incredibly stressful for reasons I’m not going to disclose. My best friend met me in Pontypridd and I was in full shut down mode. They had never seen me like this before. They dropped me at the Royal Glam and wished me luck.

The consultant was late. I’m not sure if this was deliberate, but I was basically twitching and trying not to have a meltdown by the time he eventually showed up.

We sat and chatted for about 2 hours. He changed his fountain pen twice with the amount he was writing. He liked my now rather scruffy piece of paper with the age categories and developmental milestones. (He took that otherwise I’d show you a copy now. ) He asked about relationships, social difficulties and all sorts of stuff about my childhood. I told him I live in the world below eye contact and I miss a lot of social cues because of this. I looked at his face twice but not his eyes. I wouldn’t know him in the street.

I’m going to attach an edited version of his report so that you can see the criteria he was looking for. However please be aware that he misgenders me throughout and I have asked him to edit this in the copy he sends to my GP. (It was difficult for me to read because of this.) 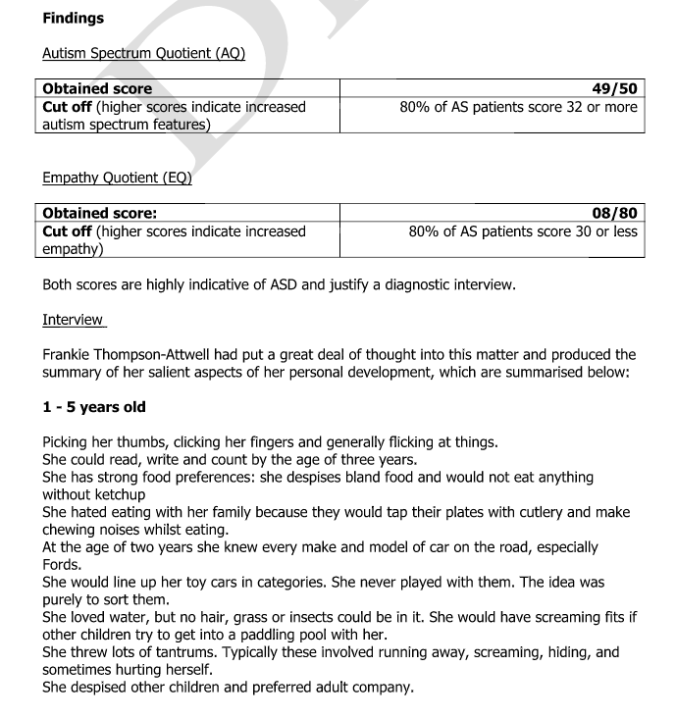 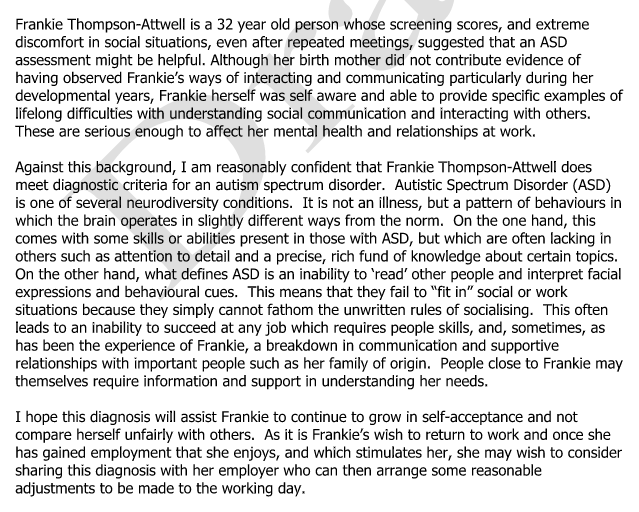 I’ve shared this process with you in the hope that it will help you if you are an adult seeking diagnosis in the NHS or elsewhere. Please feel free to ask any questions.

The search for the illusive GIC referral continues……….