This is going to upset people on both sides of the fence I imagine, but you know what? I don’t care! It needs to be said and it needs to be said now. I’m sick and tired of not getting anywhere because all the time, effort and money of people who genuinely care about animals, most of which are vegan, is being spent on campaigns that do not and are not working.

In my previous blog post about abolitionism, I talked about how single issue campaigns were not working. I also spoke about how abolitionist theory was too complex for the majority of us working class folk and we needed a more simple way of understanding it. So here we are my friends, a week in the world Animal Rights, but not the movement I belong to.

One of the top stories on the Animal Aid website is called, “Deathwatch 2012.” It relates to the number of deaths at various horse racing events in 2012. There were a total of ten horse deaths at the Cheltenham festival last year and there will probably be plenty more this year. Animal Aid’s solution is to ask for stricter sanctions and hold a demonstration outside of the racetrack over the course of the weekend.

1)      At no-point is veganism mentioned. Vegans do not support horse racing because it is the use of an animal for entertainment i.e. human pleasure.

2)      By not calling on the absolute abolition of horse racing and indeed all animal use, they insinuate to the non-vegan that it is ok to use animals as long as you stick within certain guidelines. In Cheltenham’s case this means a few quid to make people feel better about an industry that is as full of bloodshed as a slaughterhouse.

3)      Cheltenham still continues and the number of people who attend each year is growing with an estimated 220,000 due to attend this year.

4)      This article says it all really: It’s ok to do whatever we like as long as it is with the regulations. http://www.telegraph.co.uk/sport/horseracing/cheltenham-festival/9920927/Cheltenham-Festival-2013-officials-say-new-measures-should-ensure-no-repeat-of-last-years-tragedies.html

My verdict? FAILURE! Go vegan, spread the vegan message and end animal slavery once and for all. 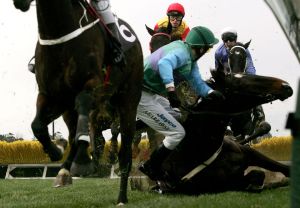 CCTV for all slaughterhouses.

This first started to be talked about in 2011. All the standard “AR” groups jumped on board and welfare organisations such as the RSPCA joined the cause too. (Don’t even get me started on them.) It was made public knowledge by newspapers such as The Guardian and the campaign even has a Facebook page. Morrisons, M&S, Waitrose, Co-op and Sainsbury’s all forced their suppliers to fit CCTV in the stunning and slaughtering areas.

1)      The CCTV does not cover the entire process of raising an animal on a farm, feeding her, breeding her, shipping her in a lorry and then the entire rest of the abattoir before the stunning and murdering takes place. How then can they be sure that the animals are not being abused, outside of the confines of the normal abuse endured by being a slave, in areas which are not covered by the CCTV cameras?

2)      The supermarkets were only insisting on their own brands. The protest groups did nothing to call them out on other brands that they would continue to sell anyway.

3)      This was done to make consumers feel better about eating animals. If they believe that the animal was not abused, then they are more likely to continue eating meat. This article says this clearly: http://www.guardian.co.uk/world/2011/feb/03/abattoirs-supermarkets-cctv-cruelty-welfare Check out this quote from Animal Aid (*sigh*) “Animal Aid said its undercover footage revealed “serious systemic problems” in six abattoirs, including substandard treatment of pigs, sheep and cows before slaughter, and improper stunning. Of all the abattoirs where it had filmed, the campaign group gave only one a relatively clean bill of health.”  So they are clearly saying to the whole of the country that they support the slaughter of animals and consumption of their flesh as long as it is done within a set of regulations. At no point do they mention veganism, which would release all of these animals from the bonds of slavery in the first place.

My verdict? People feel better about eating meat because they believe that the animal carcass they are consuming was treated well before his life was ended. FAILURE!

Well you know what doesn’t contain horse meat don’t you? Fruit and vegetables! 😉 On a more serious note, this is a perfect opportunity to promote veganism in the mainstream media, yet have I seen any of the big organisations out there on the news, in the cities and in the newspapers? Nope! They believe that the concept of veganism is too hard for people to understand. Given the right discussion, nothing is too hard to understand and if they spent half as much time and money as they did on promoting single issue campaigns, half the country would be vegan by now. True facts!

The EU ban on testing cosmetic ingredients on animals.

This particular news has filled up my Facebook newsfeed for a couple of days now. Everyone from your average non-vegan Joe to The Body Shop (a non-vegan establishment that is owned by animal testing giant L’Oreal) are shouting from the rooftops about what a great achievement this is. Sadly whilst they were busy signing petitions and holding demonstrations outside the European parliament, a new directive called R.E.A.C.H was being approved in the background. This directive means a possible end to all cruelty free cosmetics because it demands that all chemicals and compounds used within them must be tested on animals if they have not done so already. That means companies like LUSH (also a non-vegan company, but with a good vegan selection) are in deep shit and more animals than ever will be vivisected all in the apparent name of our safety as human beings. If any of these campaigns had promoted veganism with the money they spent here, there would have been a seismic shift towards vegan cosmetics thus giving vegan companies a larger market share and a bigger voice. No fuck that! We’ll just take each hurdle as it comes with our stupid little baby steps and end up in more shit than when we started.

So, as you can see I’ve been getting progressively angrier as I have been writing this post, but I cannot help it. It’s so crystal clear to me and you all need to wake up. Non-vegans, go vegan. It’s really easy and it’s good for animals, the environment and your body. Vegans, stop supporting single issue campaigns and start supporting veganism as the only way to end animal slavery once and for all.