This subject has been simmering in my head for quite some time. It is a subject for contention within the vegan community and it needs addressing.

Let’s start with the Vegan Society and their definition of veganism:

Veganism is a way of living which seeks to exclude, as far as is possible and practicable, all forms of exploitation of, and cruelty to, animals for food, clothing or any other purpose.

The Vegan Society are these days a bunch of welfarists, so I came up with an abolitionist definition too:

Veganism is a way of living that supports the social justice movement of the abolition of animal use by humans. Vegans seek to exclude all forms of exploitation as far as possible in a non-vegan world.

That’s pretty simple, right? If you’re vegan you do not support or promote any type of animal exploitation. That includes vegetarianism, honey, horse riding etc too. Veganism isn’t a diet. That’s pretty clear in both those definitions too, right? So why is the internet full of people confusing what veganism means? What do they have to gain by doing that?

When I went vegan a decade ago, the term Vegan Police was little heard of. I had only heard of it because I was part of The Vegan Forum. (We didn’t have Facebook then.) The term was used for vegans who took things too far. For example people who wouldn’t buy a vegan product from a company because the director played golf with someone who wore fur once. That’s really ridiculous and it does nothing for animals.

In 2010, Scott Pilgrim Vs The World changed all of that. In the movie there is “vegan” guy who has his super powers taken away by the vegan police because he was caught eating chicken. With the availability of social media such as Facebook, the meaning was soon lost, even though clearly in the film, the vegan police are calling out actual non-veganism.

Now, if you call out any non-veganism you get called elitist or my favourite, the vegan police. Why? I’m defending what veganism is. You’re either vegan or you’re supporting the exploitation of animals.

Facebook is full of this, especially the Vegan Humour group where people seem to endlessly worship celebrities, who 9/10 are not vegan at all. Let’s take Leonardo DiCaprio. Yes he’s a good looking man. Yes he was a producer for Cowspiracy. Yes he spouts a lot of environmental stuff. No he isn’t vegan and when I last checked, he didn’t even follow a plant based diet, synonymous with his environmentalism. He’s just full of shit. 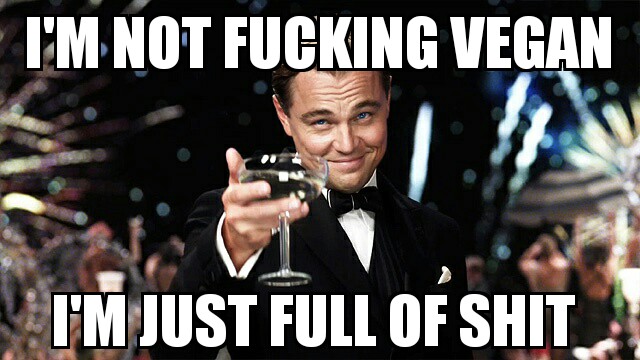 Credit where credit is due? Do I need to explain this again? This is a vegan, promoting non-veganism. This person is saying we should support Leo because he speaks out for the environment. That’s great, but it still doesn’t make him vegan or even moving towards veganism.

Here’s another one and this time it’s Miley Cyrus. She is on plant based diet the last time I checked, but she isn’t vegan because she exploits animals in other ways.

Here’s another one where someone posted a recipe with honey in a vegan food group. For pointing out that honey isn’t vegan, I was told I was rude. No, I’m not being rude. I’m standing up for what veganism is.

Due to the internet, it seems to meaning of veganism is being diluted again and again. You have vegans promoting people who aren’t vegan. You have vegans saying it’s ok to eat oysters, backyard eggs and honey. You have people interested in veganism, going WHAT THE FUCK!?

Let’s be consistent. Let’s call out non-veganism and those who promote it.

That’s not to say we shouldn’t help those trying to go vegan. Of course we should. That’s what we want right? When someone takes a step towards veganism, I find that this sentence is my best weapon and often results in full on vegan transition in a short period of time.

“That’s great! Just remember that only veganism ends the exploitation of animals.”

Imagine how many “vegetarians” would wake up with just that sentence. After all most people are vegetarian because they care about animals. That’s not being preachy, elitist or rude. That’s being honest, but supportive.

In conclusion, we are a fractured movement split even more by the internet and it’s ability to be faceless. I will always stand up for what veganism is and I will never suffer anyone who wishes to water it down. It doesn’t make veganism more accessible, it just hurts the animals. 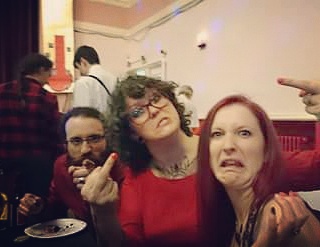 6 thoughts on “The Vegan Police”