Today has been a really productive and non-stressful day and for the first time in what seems like forever, the sun was out. I woke up at around 07:15 but didn’t bother to get up until 08:30 due to having lots of snuggles of felines, a large white woof and a beardy man times. I left the bearded one in bed and made an epic smoothie, which subsequently I spoiled him with in bed.

That did me for the whole morning because it was so filling, however on return from our 6k walk with Bailey Woof I was getting a tad hungry so I made a wholemeal spinach and pasta “cheesy” bake with a cucumber and tomato side salad. 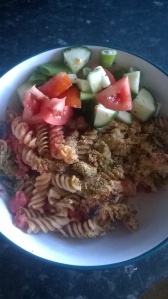 A little while after this we hit the gym where we lifted some seriously heavy shit. I needed a protein hit after that so when we got home I rustled up some cashew nut cheese on some wholemeal sweet onion crackers.  (I’ll be posting a recipe for this soon.)

For dinner Mykey made a kale, bean, mushroom, spinach and breaded tofu stir fry which totally hit the spot.

So there you have it. Simply, tasty and healthy vegan food. 🙂